Shower Diverter Valve Isn’t Working: How to Fix It

Is your shower diverter valve not working? 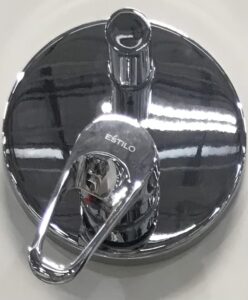 Water is probably flowing from the tub faucet and showerhead, but you don’t know how to fix it.

It can make showering more difficult unless you contact a professional plumber from Clover Services to help you repair it.

The good news is that you can also repair a faulty shower diverter by yourself, although engaging an expert is the best decision.

All you have to do is find a plausible reason the diverter valve is not working and resolve it.

Thankfully, that’s what this guide talks about. . . That’s said, let’s get started!

Why Is Your Tub Shower Diverter Valve Not Working

A shower diverter valve redirects water flow from the showerhead to a bathtub.

With a shower diverter valve, there is no need to install a separate shower stall.

The system has a bar for you to flip when you want to switch from your shower to the tabs spigot.

A shower diverter valve is bound to wear out over time, resulting in drips and leaks.

If you have a two-handle faucet, then it has one of two types of diverters.

Notably, you will likely have problems with the valve between the bathtub and shower head.

Sometimes the valve may stop working when clogged with lots of residues or when it’s broken.

But we’ll gain more insights into that later in this guide.

Meanwhile, let’s look at the types of shower diverters before trying to fix the one in your bathroom.

How to Fix a Shower Diverter Valve That’s Not Working

The process of fixing a faulty shower diverter valve is a straightforward one.

The procedure you use in fixing it depends on what the damage is, as this article will reveal

Here are the steps to follow to fix your shower diverter.

You do this to ensure you don’t create a mess as you fix the valve.

Water would seep out and flood your home.

Also, turning off the water helps you pinpoint where the leak is coming from in the system.

Step 2: Plug the Drain
Typically the shower diverter valve is above the drain if you have a standard tub.

Consider plugging the drain in your tub to prevent small components from getting lost.

You will likely drop some parts accidentally, so it helps to be cautious.

If it does happen that you drop objects down the drain, you can always buy replacements for them.

Step 3: Remove the Spout
If the diverter valve is at the back of the pipe and the faucet spout, you need a wrench to remove the spout through the front.

Twist the spout in the right direction; otherwise, you will strip its base.

Take your time and try your best to be accurate to avoid causing more damage than there is.

Step 4: Replace the Valve
Sometimes tightening the screws or removing buildup may be ineffective when you have a malfunctioning shower diverter valve.

You might find that your only answer is to replace the entire valve.

Replacing the valve is a process that requires accuracy.

Ensure that you get the correct model.

Valves have tiny variations that make all the difference.

Allow someone with more valve-related knowledge than you to help you pick one.

It will take 10 minutes to replace a shower diverter valve.

First, clean the valve opening using a rag dipped in vinegar, and then grease the seat washer and 2 O-rings.

You can finally push in the new valve and screw it in.

Use a socket wrench to tighten it.

Finally, you can install the escutcheon and the handle, which requires a screw to fasten.

Use a cap to cover the screw head.

Finish by turning on the water and diverting it to the shower.

Keep an eye on the pressure while checking if the bathroom spout leaks while the shower runs.

Ensure the water diverts to the tub to ensure everything is in place.

As you fix a shower diverter valve, you should find out the reasons why your shower divert valve is not working.

That way, you know what you need to do.

Why Is Your Shower Diverter Valve Not Working Properly

Knowing some factors that could affect the functionality of a shower diverter helps you see what you need to fix.

Here are the reasons the shower diverter valve isn’t working.
1. Blocked Diverter
You will notice that your valve refuses to open and close, usually indicated by water pouring out from both fixtures simultaneously.

The block could be calcium, dirt, or grease buildup, which you can take care of by soaking the faucet in a vinegar solution.

2. Corroded Threads
A shower diverter could malfunction due to corrosion of the threads connecting the spout to the pipe.

Also, the spout tends to flake over time, and sediments assemble in the shower.

3. Stuck Diverter
A diverter relies on lubrication to stay mobile.

Lack of lubrication cusses the diverter to tick.

Lubricants like a cooking spray can help restore it to its functional state.

4. Broken Washer
A shower diverter valve might have rubber or nylon washers.

Time can work on the washers causing them to crack, fall apart or bed down.

The result is that the valve stops working and the only thing you do is replace the washers.

You don’t have to pay someone to fix your shower diverter valve.

The repair process is relatively straightforward, especially when you know all the essential information.

For instance, in case you decide to go with a replacement, go for the right brand and watch out for those variations.

Involve an expert if you get stuck.