Where did the other house go? Thanks to Ugly Belgian Houses for the photo   For more Unusual House Photos, Wins, and Fails, have a look at: What the………………….?

If you live in Victoria and are planning a garden I would suggest you visit the Cranbourne Botanic Gardens. I visited a couple of weeks ago and was really impressed. Lots of different varieties of plants. The opportunity to see…
Read more Be careful if you do any concreting around the house. Make sure you put your phone somewhere safe otherwise you might leave a fossil like this!   Found this photo on the Tradie Mayhem Facebook page   For more Unusual House…
Read more A Glamorous Guide to Re-Designing your Home Bathroom Guest post by Hubert Dwight Often ignored when it comes to home design, a great bathroom can really add value to your home. This season, why not redesign your bathroom to make…
Read more

One problem with solar systems that I only found out about after my solar system was installed is the effects of ‘High Grid Voltage’. How I found out The system that I bought had a Fronius Inverter which includes a quite…
Read more

Ecological solutions that will help your family Guest post by Nick Stoyanov It’s about time for people to start paying attention to their environment. Although it might sound like something that is hard to do, we can easily change our ways becoming a more ecologically conscious society. In…
Read more This building in Warsaw is called the Safe House. Safe from Zombies perhaps? Certainly not the most welcoming. In actual fact it does look a bit better when it is opened out as you can see at this link www.dezeen.com  …
Read more

Pool Before, Or After House 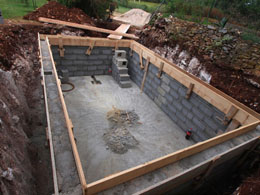 I have seen pools built before the house is built, and afterwards, so I thought I would discuss the options. Build First A lot of people find it very hard to visualise a finished house and it’s surrounds from drawings….
Read more

This mansion under construction is Pensmore in The Ozarks It has been decided that it would be a demonstration site for a construction method using foam and a steel fibre reinforced concrete. The idea of this method is that the…
Read more