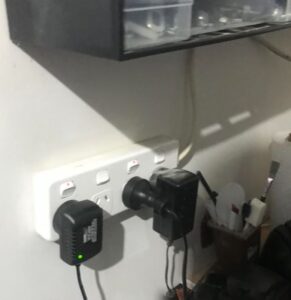 In my current garage I had three double power points installed. . . . which I thought was plenty.

With the amount of power needs on my workbench, including battery chargers I had to fix this power board to the wall.

What We Had Installed

I asked for double outlets at:

What I Would Do Differently

More Electrical Planning including 24 pages of Check Lists in the